Mystery of the black-stamped Vellum: The History (Part two)

There is one prevalent type of binding that comes up when searching for Dutch Vellum binding, that is Prize Bindings. These books were given as prizes in the Netherlands (and later it seems, in other  countries like England and Ireland) from around 1633 until 1830. (Quote)

Prize bindings were simple hollow backs with stiff boards, decorated with a supralibros on the center of the covers, with some type of rectangular decoration on the perimeter.

As I found, very fine bindings were executed in gold and I ve found many examples using the Memory of the Netherlands Portal. (all images are links to the original entries). 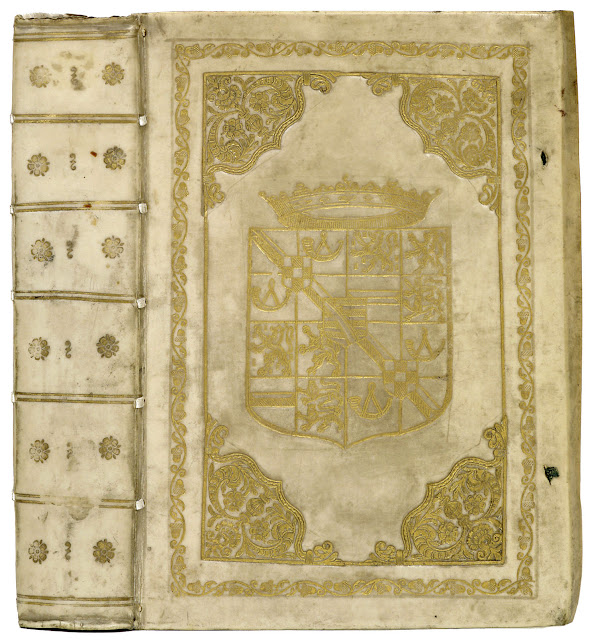 I tried to find other examples, using keywords in Dutch: parchment (perkament), zwart (black), gestempeld (stamped), but nothing came up except this small binding in green vellum: 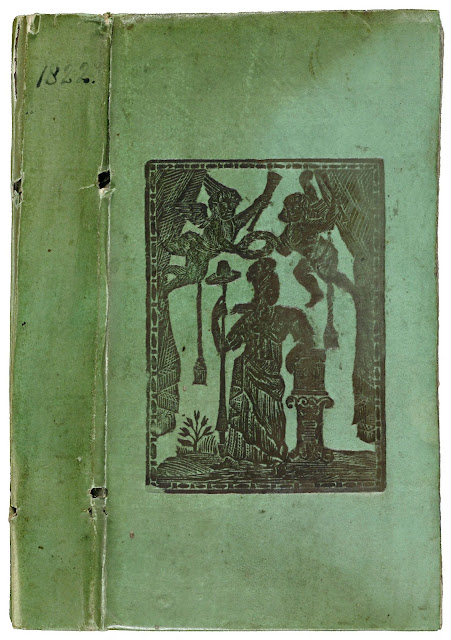 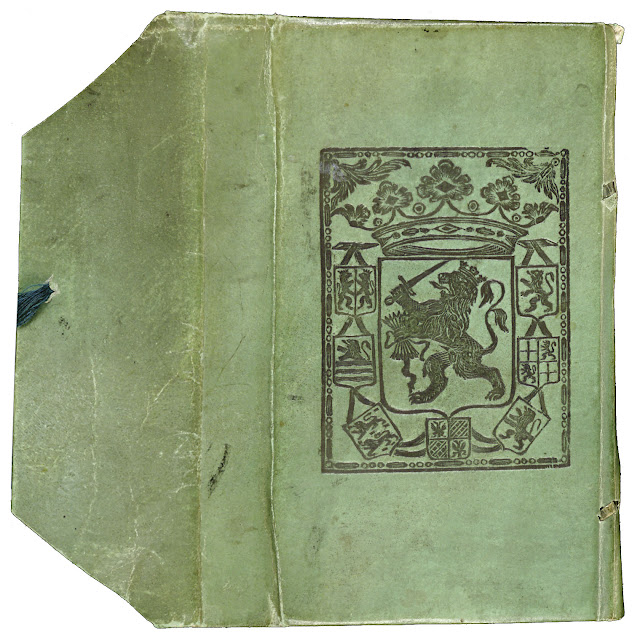 The book`s description mentioned it was on green parchment stamped in black, with the question mark associated with Zilver (Silver). I introduced that as a search term and lo and behold, the wonderful world of Dutch silver-stamped bindings turned black opened up to me: 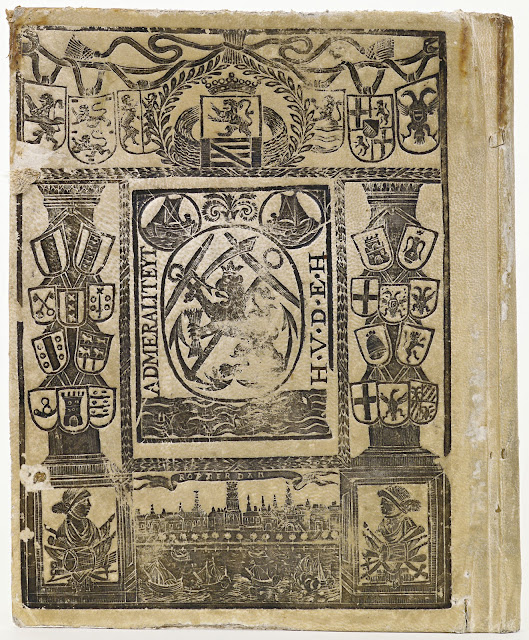 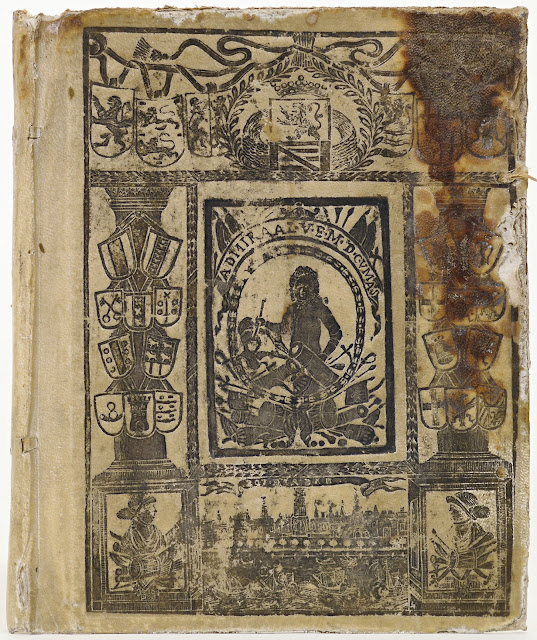 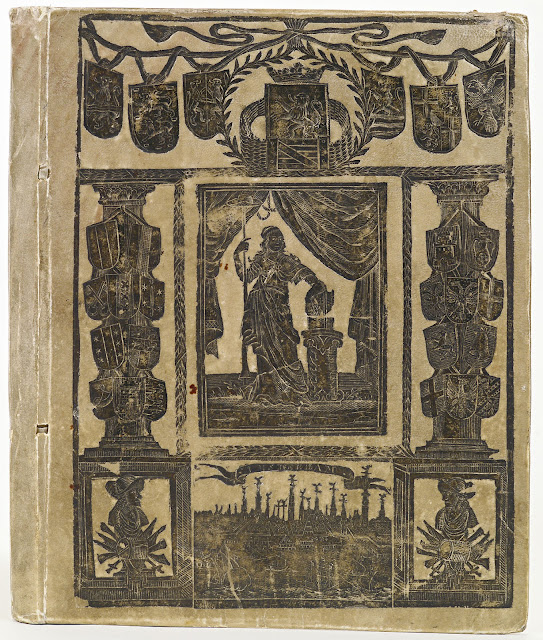 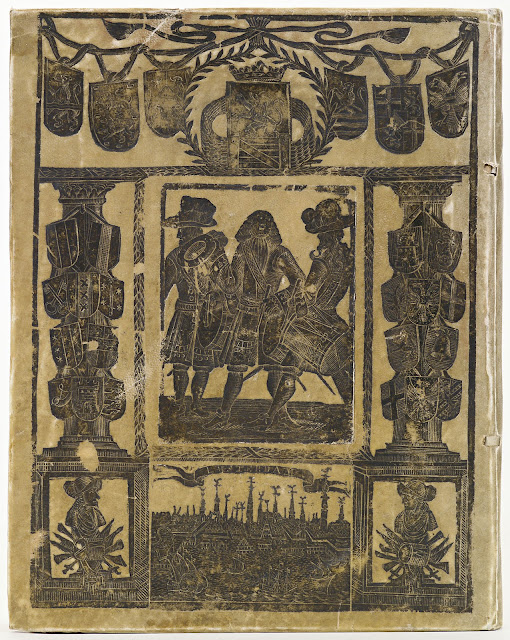 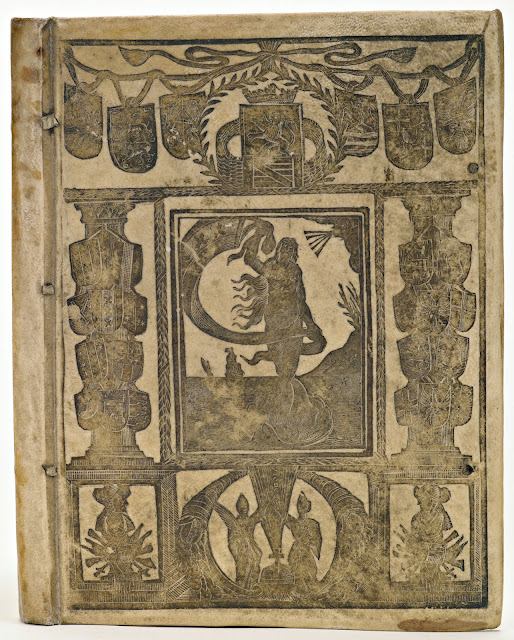 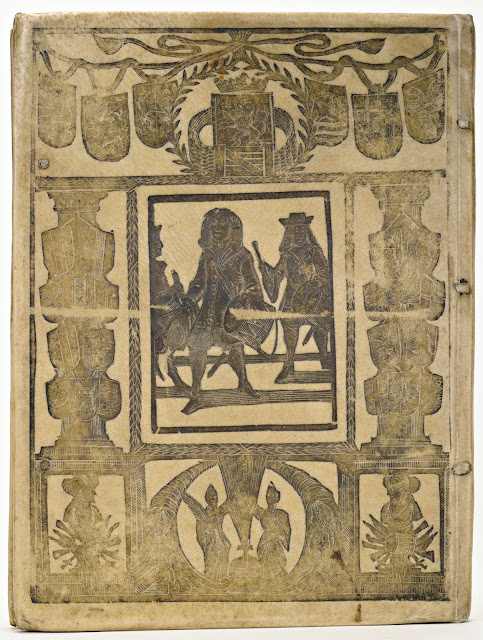 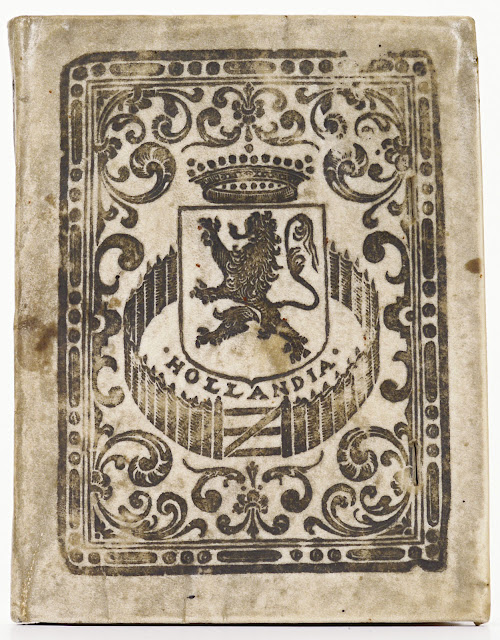 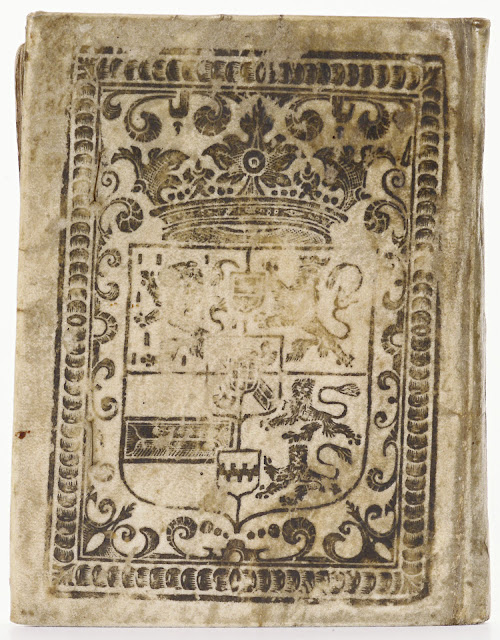 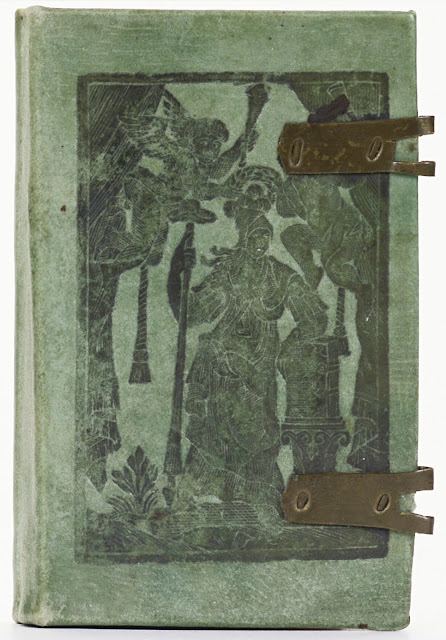 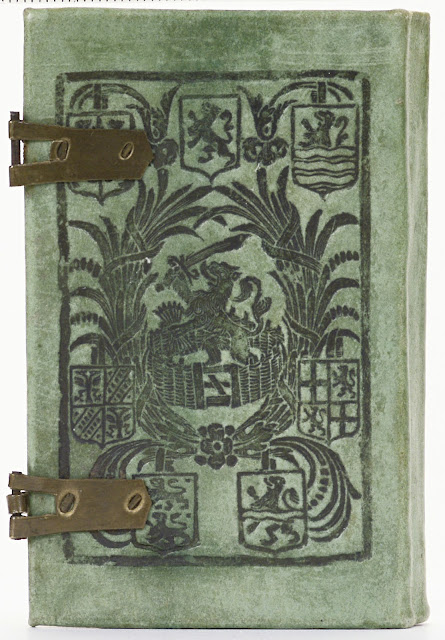 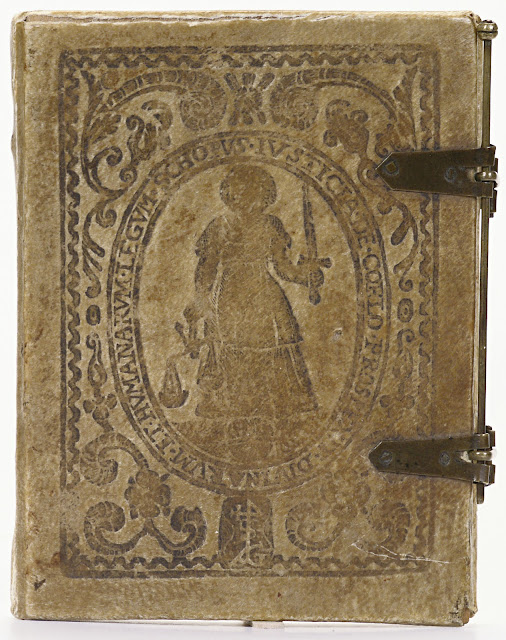 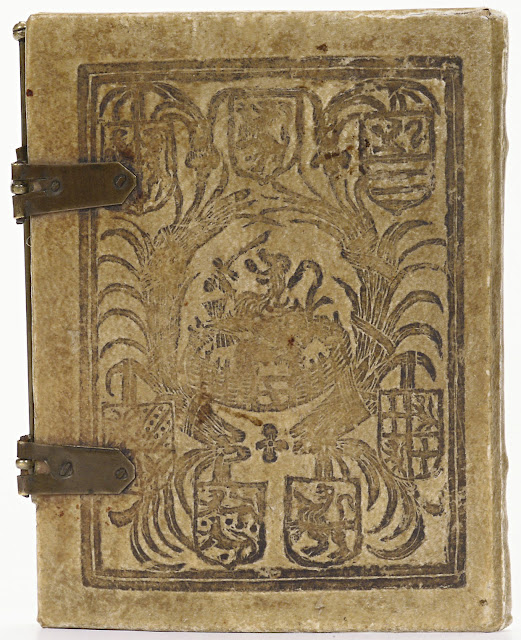 One might think that these bindings are executed entirely using large blocks, but we also have examples of decorations done by combining stamps and blocks, like this one, from 1726: 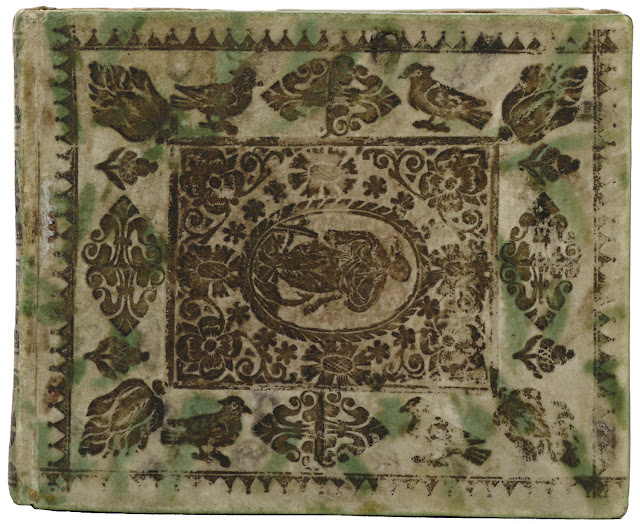 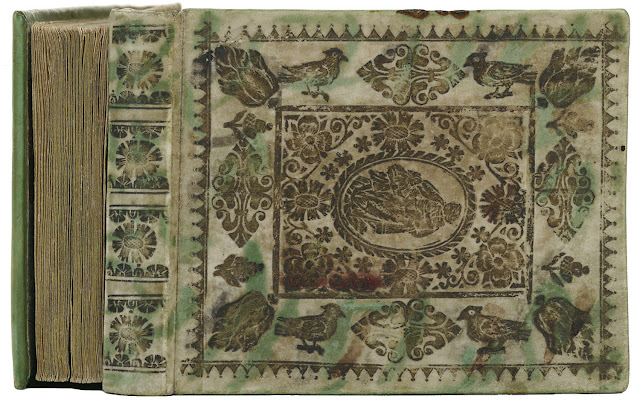 It seems the further back we go, the more likely is the chance to find tooled bindings, not blocked ones. The small binding below dates from about 1750, was bound and tooled  (not blocked) by Jacob Cornelius Schoots van Capelle of Amsterdam. The description also lists silver as the substance used. 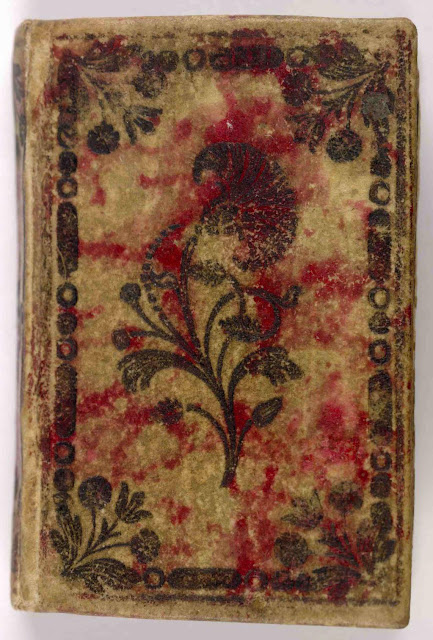 As we will see in the Technique, Zaehnsdorf will be a huge help, in his Art of Bookbinding, he opens his section on vellum binding: The Dutch, as a nation, appear to have been the first to bind books in vellum.