Mystery of the black-stamped Vellum: The History (Part one) 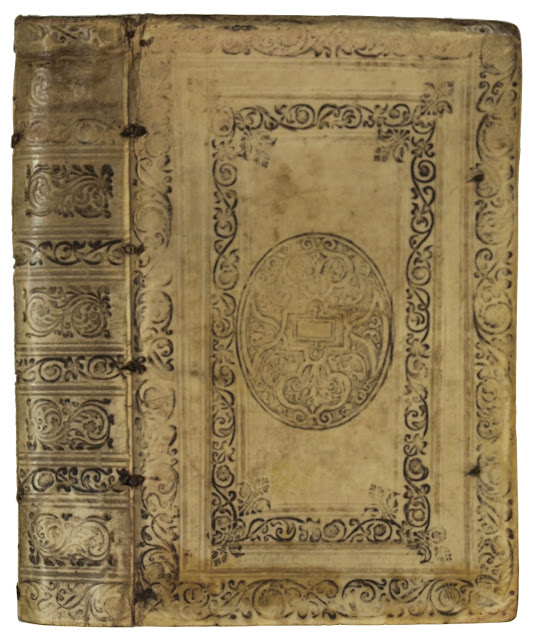 My posts have become more and more specific and less commercial in nature as my interest for historical bookbinding styles grows. They become less important to my general client list and steer towards true old book collectors and connoisseurs. As these are mostly outside of my country (Romania), and as collectors in Romania already have a working knowledge of at least two or three languages, including English, the decision is pretty obvious.

Now what on Earth is this, you ask? It`s a small series of three articles: The History, The Technique and the Replica.

It deals with a very special and forgotten type of binding, featuring vellum stamped with black decorations, the details of which all seem to be indifferent to. This article deals with a few examples and some guesses. The Technique will follow my attempts to reproduce the way these bindings were produced, while the third article will follow closely with my attempt to reproduce such a volume following the conclusion of the technique.

I first met this type of binding while rummaging through the wonderful Folger Library Collection. I found two bindings executed in this fashion and that propelled my interest.

The image presented above , and its back, are featured Here. 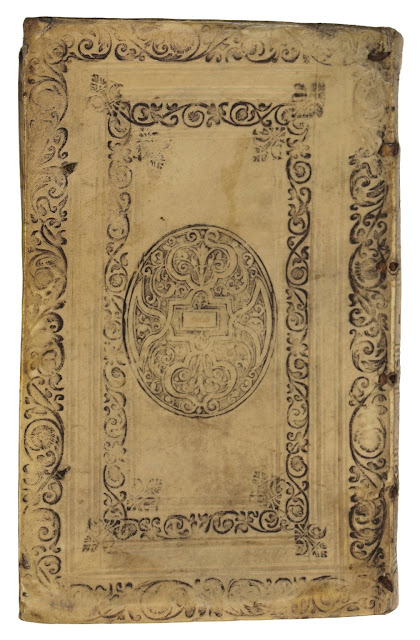 For what it`s worth, I highly doubt the dating of this binding. I might be wrong on all three points but 1.Most examples come from the  17th and 18th centuries 2. Case binding on pasteboards also scream out 17th century 3. The central stamp is a derivation of the Fanfare style.

The first one I found, which will most likely be the model for the replica, is This one: 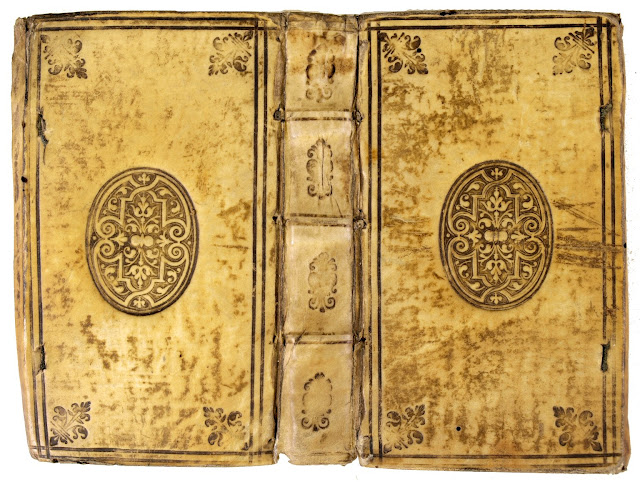 It`s dated more realistically: Early 17th century Dutch stiff board vellum binding. The vellum covers are blind tooled with carbon blackened tools. There is a double line fillet border with corner fleurons and a center oval strapwork stamp in the center. The spine is divided into four panels by double lines, the panels have an elongated fleuron stamp in the center.

The record tells us that the technique used is calf vellum on stiff board, blind tooled with carbon blackened tools, and this was my original guess as well.

This type of binding is certainly not a cheap, trade binding, and certainly not the top of the quality the Dutch and German binders produced:

So this was a cheaper alternative for pretty-looking yet durable bindings. The only problem I had with carbon tooling was the lack of information on the technique used.

My reconstruction is as follows:

1. The vellum is mounted onto the covers, vellum strips fastened (laced) through the boards and stuck on the inside.
2. The vellum stuck to the spine and the vellum strips used for sewing worked.
3. The vellum dampened with a medium (of which glaire or vellum shavings glue would be my main suspects)
4. The tools blackened well on a candle flame or oil wick flame, simultaneously heated gently.
5. Imprint made.

This would explain the slight depth to the tooling and the crisp black impressions that we rarely have with gilding on vellum.

Was this the proper method? We know making carbon prints of the tools on paper was a technique used either for copying tools or for planning out elaborate designs to be blind tooled and then gilded. Might the crisp black result have encouraged creative binders to apply this to vellum?

The medium used must have been a hydrosoluble animal matter similar to those used in gilding, and my study will concentrate upon a few mediums. But the easily-soluble glues and carbon might not yield a stable print and these books were quite used, not simply stored as relics. Might there be some sort of fixative that kept the carbon on? This question lead me to think that the culprit might be another: a material meant to be noble enough to adorn vellum with, cheaper than gold leaf, precise enough to hold this sort of detail, that is not so easily erased as carbon prints, yet becomes blacked with age: silver.
Publicat de Mihai Vârtejaru la 11:36