Mystery of the black-stamped Vellum: The Technique

In order to reconstruct the technique, the following processes were followed:

Before going to the tests, we must study the history and available information about tooling on vellum or on parchment.

Parchment and vellum are often terms used interchangeably. They are obtained historically from calf, goat (with the finer option of kid) and sheep (with the finer option of lamb). Strictly speaking, true Vellum is only obtained from unborn animals. So when it comes to the origin of the material, the quality scale would be: mature animal (poorer quality), youngling (better quality) and foetus (premium quality). The thicker skins of these animals were likely split and more than one layer were obtained to be treated separately. One such case is the kosher writing surface employed in judaism. The full calfskin is called Gevil and it is used for Torah scrolls, while splitting it produces two parchments, upon whose identity there is no common consensus, but largely considered that the top layer is best, called Klaf, and the flesh layer is inferior, called Duchsustus.

It's more than likely that the Dutch bindings used calf skins. The goat and sheep have a much courser grain, which would show on the surface, while calf is much smoother. Presumably, for regular books, thin parchment was used, while for finer bindings, vellum was employed.

Sean Richards reported that a lot of silver-stamped bindings that he studied in Dresden are alum-tawed pigskin, a very different material that merits its own article and study.

My resources being limited, I commenced my experiments on very fine examples of kidskin obtained from the Romanian Institute for Leather Research, the only institution that produces archival quality parchments, vellums and leathers in my country. The production is by demand, the research team is highly professional and the results are astounding. Chief technician Marian Crudu was kind enough to offer me a few samples to start my experiments.

The following substances have been used as sizes for treating the vellum for a test run, for both lamp black and silver.

In all due fairness I must say I could have used modern binders and agents like MC, CMC, various resins and compounds, but I chose these because they are historically accurate substances that might have been used by the Dutch binders. I have excluded the use of human substances, although i am well aware of at least two that are suitable for this.

Two test sheets were made, one for carbon prints and one for silver gilding. Each sheet was divided into 8 section, each section washed with a damp clean cloth to remove any fatty residues from previous handling and each section was carefully filled with one layer of the size listed above.

The sizes were applied all at one in the quickest time possible and left to dry for 60 minutes (15 minutes are more than enough). 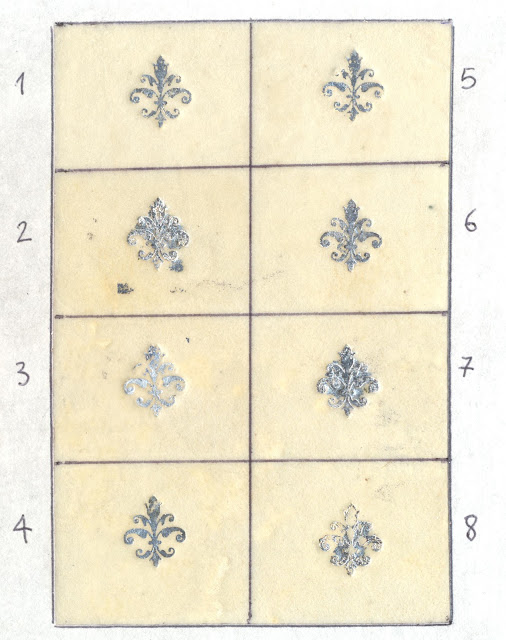 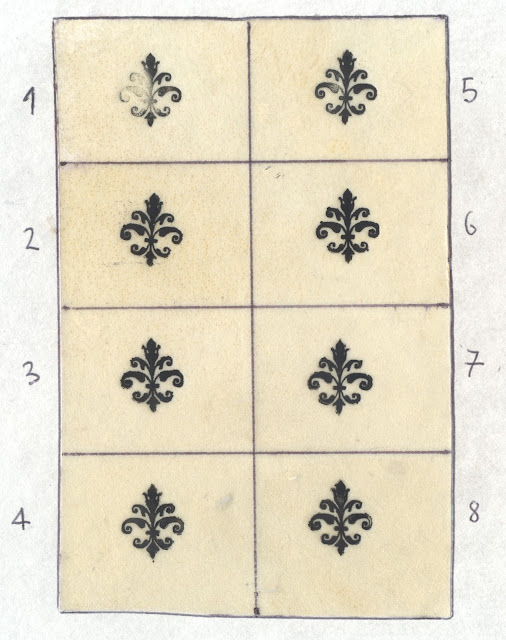 Weakest mark is on vinegar.
Except paste and bone glue, all adhesives proved satisfactory.

4. Studying the effects of washing.

Applying any of the aforementioned sizes resulted in a thin layer of the dried matter. Unlike Zaehnsdorf reports, an ugly stain, I just found that the vellum acquired a specific luster, especially with glues and glaire. If buffed with a cotton rag, the shine gave the vellum a very unique luster.

But seeing that these sizes were hidrosoluble, the handling of the book might easily imbue the vellum with water and reactivate them. The sizes might become tacky, the carbon would rub off and the gilding might slip away even. So a gentle washing would remove all three problems, sadly, along with the shine. The samples were wiped with a cloth soaked in cold water and passed over several times. 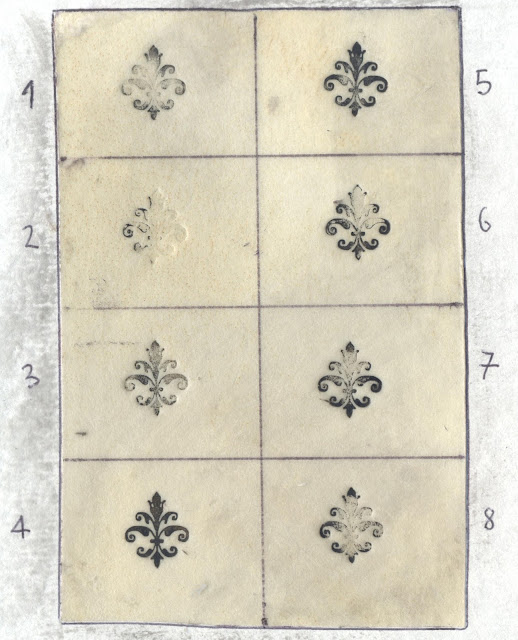 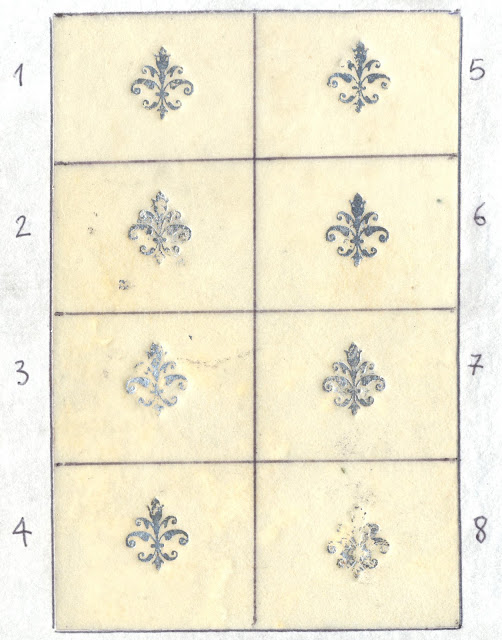 All marks are resistant, except vellum and bone glue, which prove unstable.

From these samples we might conclude that for both techniques, the best size is glaire.

5. Studying tarnishing methods in the case of silver tooling.

I have made numerous trials after the initial one and all recipes for glaire were satisfactory, the best being the vinegar-water-albumen mix and the pure whisked albumen.  These sizes produced the best results indifferent of the drying time of the glaire, water/vinegar content, dwell time and temperature variations and tool type. Below we can see a very fine tools with lines and dots produces results as good as a thick aldine tool.

It s quite clear that these silver tooled bindings were not meant to be black, but rather a cheaper to gold leaf. They were bright and shimmering upon first glance, but in time, the tarnish would set in and become darker and darker.

I will experiment with four substances, one chemical and two natural. In my discussions with Sean Richards (Byzantium Studios), he related that he used hydrated selenium for fumigating a similar binding, but that he would not recommend it for archival projects.
My control substances are sulphur dioxide, boiled egg yoke, onion and garlic.
a. Sulphur dioxide is obtained by burning raw sulphur. It is used strictly experimental and it is ill advised to expose leather or vellum to it, as it is one of the main reason of deterioration of these materials

b. Egg yoke. Although the albumen contains ten times more sulphur than the yoke, I decided to use the left over yoke from the extraction of the albumen used for glaire, rather from convenience. I believe that the gaire itself contains enough sulphur to tarnish the silver naturally, but an entire boiled egg might prove more effective in obtaining tarnish than just the yoke.

c. Onion and d. Garlic are vegetable sources of sulphur compounds. Garlic juice can even be used in gilding, according to the Byzantine icon methods, but I avoided putting it in my control substances used for gilding the vellum because of its strong smell.

The three natural substances were put in the jars and placed in a well-lit place. The sulphur method was different: I placed a glowing red coal on a metallic base (to protect the glass from thermal shock) and sprinkled sulphur powder on it, closed the jar immediately and waited for the sulphur to stop burning, about 5 minutes, and replaced the lid with the one with the vellum mounted inside. Should the vellum be placed directly under the burning sulphur, the flame re-ignites and burns or shrinks the vellum.  I do not recommend sulphur fumigations unless you know what you re doing, and working in a well ventilated area. The sulphur dioxide is very toxic and produces a very bothersome cough. Also, I would not like to recommend boiling and separating yokes to my worst enemy... Crushing garlic and onions can only produce a slight craving for spicy food, but nothing to shed tears about.

Tarnishing results after 10 minutes:
A. Slight multicolored tarnish
B. None.
C.None.
D.None

After the 24 hours observation, I decided to experiment more: I renewed the sulphur fumigation and I rubbed garlic and onion juice of the samples letting dry in full sunlight. 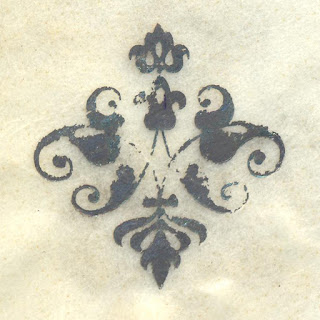 A. The sulphur produced the blackest tarnish, still retaining metallic characteristics. A few fumigations should produce opaque black, but this method is ill advised for  actual bindings. It just serves to show that the black is indeed silver tarnished in the presence of sulphur dioxide through the years. 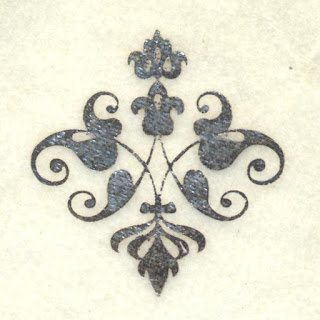 B. Egg yokes. The tarnish was quite dark, but still metallic, not opaque. I believe that a longer exposure would produce blacker tarnish. I will repeat the process with hard boiled eggs, to get the maximum amount of sulphur from the yoke as well as from the albumen, missing here. I gather that the double layer of glaire will be the absorbent for much of the sulphur dioxide, outside the silver stamp, and it will not permeate the vellum causing any aging or brittleness, but will be eliminated by washing. 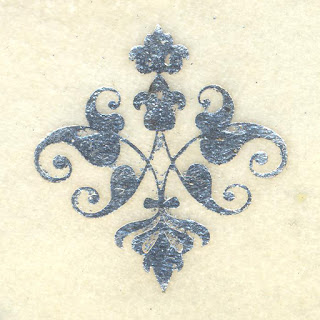 C. Onion. Even after 24 hour exposure and juice washing, the tarnish did not appear, except in three small dots that are absconded in the scanned image but can be inspected in light, roughly 1mm in diameter. The rest of the mark was largely untarnished. 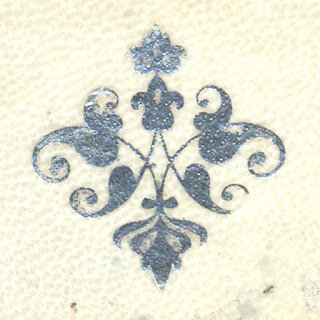 D. Garlic. The wash did not change the color much, but the 24 hours did cause a slight tarnish, yellow in color, to some parts of the tool.

In the case of carbon tooling, the vellum must not be blinded in and glaire painted into the marks, as this would take quite some time, especially with decorated rolls. Rather than this, the whole surface is to be degreased, covered in glair (parchment or more porous vellum might require two coatings) and the tools impressed upon the glaire after being thoroughly blackened and heated in the flame. After this, the surface must be cleaned with a damp-to-wet sponge or cotton ball, until all the surplus carbon is cleaned and the glaire washed off. It's advisable to press the book gently for at least a week under moderate weight, in order to not crush the impressions, between plates lines with blotting paper. After drying, it is possible to apply a weak varnish such as shellac, but that will yellow the vellum in time even faster than the natural rate and might make the material brittle, especially problematic on the joints.

In the case of silver tooling, a fine silver leaf is to be used. The vellum is glaired as above (one coat on fine vellum, two coats on parchment). The silver will not stay if the glaire is completely dried and will slip away at the finest wind. It can certainly be tooled, with great care. On small areas, one can blow slowly on the glaire or on the silver to accumulate a bit of moisture and then set on, but this method is slow. When tooling a whole cover I found it equally good to lay on the silver leaf when the glaire is moist, after a few moments the whole surface is covered. Weather slightly dampened by the sponge or by breath or not dampened at all, I obtained very good results. Once finished, it can be allowed to be tarnished in time (a few years), or darkened artificially by exposure to crushed hard boiled eggs until a sufficient tarnish is produced, depending on the purity of the leaf.  It's highly unlikely that any varnish was used historically, as the varnish would have prevented the tarnish from forming.