In search of Lady Justice

Last year, a special piece came into my collection of bronze dies: a small Lady Justice. 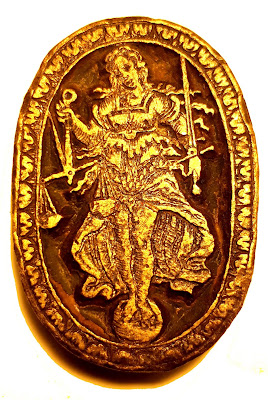 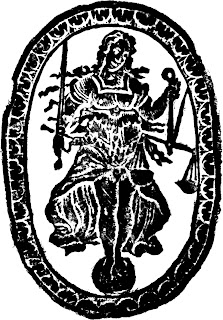 Size: 52 x 36 mm
Thickness: 6-7mm
Material: bronze
Markers: none discernable
Description: the Roman Goddess Justitia (Greek Dyke) is shown sitting atop a sphere (presumably Earth), looking towards its left, wearing a 16th century dress, not a traditional robe or toga, with locks of hair flowing in the wind. Of her three symbolic attributes, only the sword (in the right hand) and the scales (in the left hand) are present. The blindfold is absent.

It was given to me by the binder Vicențiu Pavelea. According to his account, he received it from a Jewish master binder in the late 80ies, called Katz, with two others. Where he himself acquired it is yet be be known.

Although some catalogues and ill-informed books claimed that printing dies were often use to stamp bindings, I ve found through study that this is not true. Most dies used typographically were woodblocks, while the blocks used by bookbinders were cut in bronze. This is such a block. The full effect is to be achieved when stamped in gold, not in ink.

According to the cut, the shape and the patina, I d say it is not older than the 17th century and not newer than the 18th century.

1. The possibility that this is just a decorative design would increase with novelty: the older such a die is, the rarer it is thus, the more expensive, and not likely to be done just for visual effect. The newer it is, the cheaper it would be and the greater the possibility that the commissioner did not have any significance in mind.

2. Allegorical use would indicate being used to goldstamp books about law. Valid possibility.

3. The most likely use would be that of a printer s mark, a printer who would have used this ensignia, and who might have also been a bookbinder. Due to the fineness of the cut and the clothing, we are searching for a printer who used this mark who was active in the 17-18 century in an occidental European country. 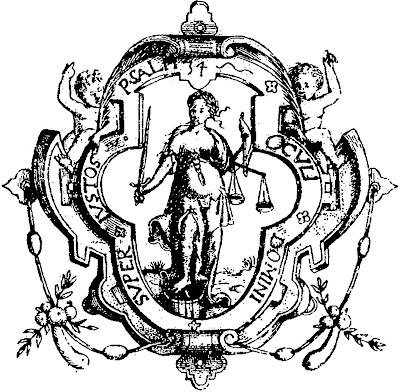 The mark represents Justitia looking towards the right, loosely robed, right foot rested on a wooden bucket, holding a sword in the right hand and scales in the left. She has no blindfold, but she is crowned with laurels. The shield is flanked by two putti (or just two children, as wings are absent) and the motto reads:  OCVLI DOMINI  SVPER IVSTOS PSALM 34, that is, a Latin quote from Psalm 34: The eyes of the LORD are on the righteous.

There is a slight chance that this is not Van Haestens mark. A very different mark appears with the  mottos CONCORDIA INVICTA and can be seen on this very fine copy of Theophrastus.  The book was printed together with others, among which Johann Meire (Jean Maire), who shows up in Van Der Haeghen with an anomaly: 11 marks are very similar and with the same motto, while two are similar to the mark on Theophrastus, which would mean that the mark shown above is does not belong to Van Haestens, but to someone else. 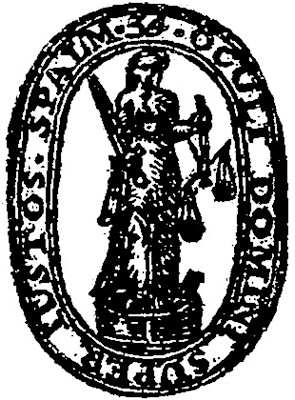 Except the ellaborate shield, this mark is identical to the one above, albeit cruder in draughtsmanship, right down to the motto: SPALM (sic) 34 OCULI DOMINI SUPER IUSTOS.   So my hytothesis is correct, the two marks above both belonging to Balck. 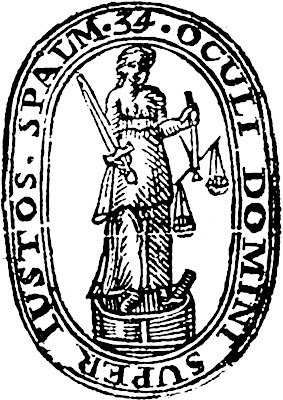 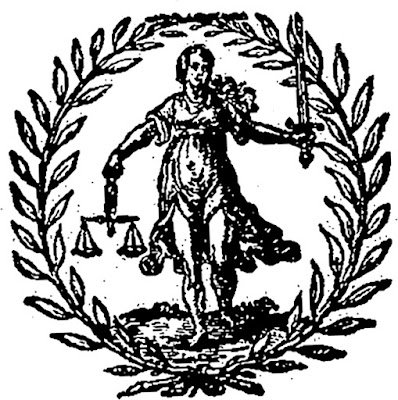 A clearer version can be found on the title page of this 1633 edition of De elementis eorumque mixtionibus: 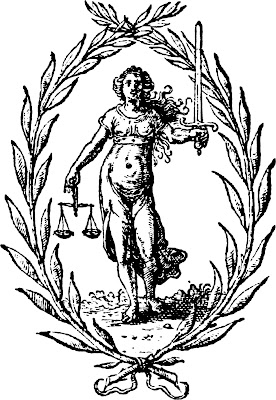 The dress and the hair are flowing, no blindfold or laurels, no Earth Sphere or bucket, sword in the left hand, raised, scales in the right hand, lowered. The embled would fit Joost perfectly, as his Latin name, Justus,  would be precisely the male variant of Justitia.


My die has the overall style of Lievens, including the oval plant wreath, but the precise symbolic details of Balck. No idea what to make of that.

Any information on any binding bearing this or any similar insignia would be appreciated.